Oscars night is this Sunday, and all eyes are on the red carpet, wondering what celebrities (who are just like us, but better!) will say, do, and, of course, wear this year. While this year in fashion is distinctively different from other years of fashion, it also has a lot in common with every other year in fashion history, and I for one can’t wait to see how many ways the fashion is discussed in both its differences and similarities. We’ve seen some crazy things over the years: men with haircuts, women standing next to microphones, clothing that reveals human skin! — and we have a feeling that this year will yield some unpredictable moments for all of us, especially those of us who are watching from home eating Combos out of the bag and tweeting funny disapproving comments about expensive outfits worn by people we do not personally know!

Because lists are an easy way to provide your reader with a sense of accomplishment, here is my list of Top Ten Things I Personally Would Like to See on the Oscars Red Carpet This Year.

TOP TEN THINGS I PERSONALLY WOULD LIKE TO SEE ON THE OSCARS RED CARPET THIS YEAR:

Do we all remember Angelina Jolie’s right leg’s breakout star moment in 2012? Of course we do, because we know more about this star-studded event than anything that our siblings or parents did this week. Here is a quote from the Huffington Post about the leg attached to the actress and humanitarian who is currently beginning production this month as the director of a new Netflix original film based on human rights activist Loung Ung’s memoir, “First They Killed My Father: A Daughter of Cambodia Remembers” :

It was the pose seen ’round the world: Angelina Jolie stepped onto the Oscars red carpet, planting her hands on her hips and forcefully jutted her right leg out in front of her, like she was George Washington crossing the Delaware River. For a woman who typically eschews red carpets altogether and likes to keep a low-profile, Angie’s bold right leg took plenty of people by surprise. Poking out from a heavy, dark Versace dress, the slender right leg seemed to have a life of its own.

It’s been four years since the leg with a life of its own attached to the torso of a UN Goodwill Ambassador made its debut, and I would like to see more legs take ownership of the red carpet in 2016, preferably still attached to celebrities such as Jake Gyllenhaal or the guy named Daniel who is “Damn, Daniel,” whom I assume will be there as well.

Everyone loves a statement lip, and these statement lipsticks are proof-positive that a bold lip color means that you have something to say, which no one will write down or report on, because everyone was too busy reporting that you put colorful paint on your lips.

Everyone loves a joke! Make more jokes! Sean Penn is an excellent joke.

I would like to see Lady Gaga on the red carpet. Here is a picture of her last year, where she is not on the red carpet, and seems happy while performing for millions of people, many of whom will say snarky things about it later: 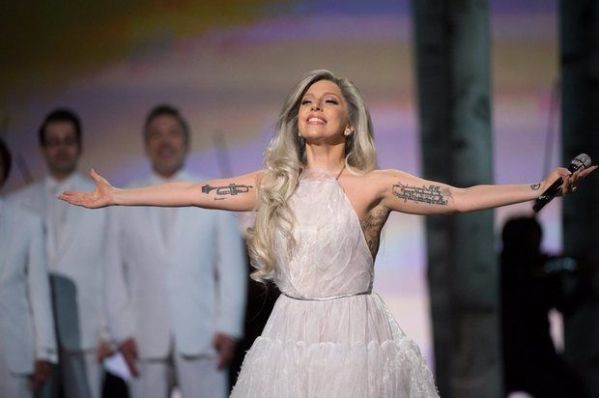 This year, she will be introduced by Joe Biden before performing her Oscar-nominated song, Til It Happens to You from The Hunting Ground, a documentary about campus sexual assault. As campus sexual assault is a very pervasive issue, and one that affects one in five college students throughout their academic career with an estimated 95% of rapes unreported, I would like to focus on the time she spends standing on a red carpet while looking at cameras, preferably while wearing high heels and a wacky hat.

You guys remember this?

Of course you do. It was the background of your cell phone in 2014! You shared it on Facebook because you feel very closely connected to everyone in this picture, except whoever the guy in the middle is, who looks like your Uncle Al but isn’t!

This is an actual quote from Us Magazine that reminds us that the people who make movies are also people!

Win or lose, actors are bound to take selfies as well. Even more, a few will probably photobomb their famous pals. Some stars who’ve jumped into photo ops at past shows include Benedict Cumberbatch, Jennifer Aniston, Justin Theroux and Jared Leto.

I can’t wait to see what will happen when people who are just like us — in that their cell phones also contain cameras, just like ours! — will do! Maybe even some of them will run into their friends and coworkers at an event for people working in their industry and decide to take a picture together! Only time will tell but I can’t wait to see if 2016 really ups the Oscar night celebrity selfie game. I personally will not be satisfied until I see Jennifer Lawrence, Ariana Grande, Alex from Target, a sentient flower umbrella from the Coldplay halftime show, Oprah, the Deadpool costume, and BB-8 squeeze in together.

I’m not kidding even a little bit about this one. Look at this. LOOK AT IT. 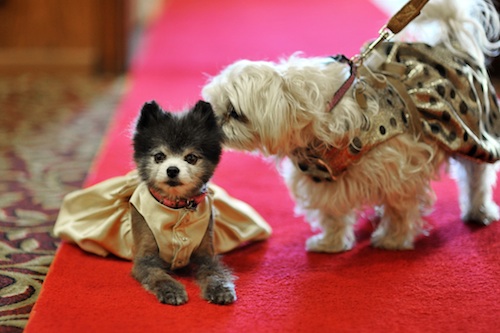 IF THE PUPPY BOWL IS A REAL LIVE THING THAT THE HUMAN RACE INVENTED FOR THE BETTERMENT OF THE WORLD, I SEE NO REASON WHATSOEVER THAT WE CAN’T TAKE THIS OPPORTUNITY TO MAKE TINY COSTUMES FOR DOGS ON LEASHES. I am also EXCELLENT at dog/celebrity puns. Look out, there’s Jennifer Pawrence and Amy Pawler, hanging out near James Earl Bones!

I’m really not kidding. This is an excellent idea and it should exist and if someone wants to pay me a salary with benefits and insurance to make it so, I’m an organized self-starter with excellent managerial skills.

Except you won’t see any this year, because only women win awards for playing prostitutes.

Except you won’t see that either, because only men win awards for playing soldiers.

2.  Every single attendee dressed up in costume as their favorite Alan Rickman character in a perfect tribute to the late, great, and thoroughly wonderful actor.

Let’s not be done talking about Alan Rickman yet, please.

Did you enjoy this post? Help keep me writing.