As it currently stands, I am wearing fuzzy socks and warm pajamas, on the evening of the ninth biggest snowstorm in Philadelphia’s history. I’ve baked a quiche, pan-fried sweet potato pancakes, have gorged myself on coffee and Triscuts and goat cheese and beer, because there is no excuse quite as convenient as a blizzard to spend an entire day eating and drinking and cooking in your fleece-lined socks.

As it currently stands, there are twelve reported deaths in the United States as a result of this snowstorm. The usual suspects. A man had a heart attack while shoveling. The rest died in auto accidents. People of all ages. One child, a boy, four years old.

I am thinking about this because of this paragraph, written with humor and eloquence by David Dudley in yesterday’s New York Times.

There’s something cartoonish about the menace of a blizzard, in which nature’s wrath assumes a fluffy, roly-poly form and tries to kill you. It’s the meteorological equivalent of getting smothered in Tribbles, or attacked by the Stay-Puft Marshmallow Man. And yet, kill it does, via car accidents and heart attacks and other misadventures, usually involving people trying, unwisely, to do something.

I am thinking about this because I am lucky to be inside right now. I am not a doctor or a nurse, or anyone who keeps an emergency room or an intensive care unit safe during a time of crisis. I am not a person who plows roads, or drives large trucks containing massive quantities of rock salt. I am not a police officer, a firefighter, or an ambulance driver.

I’m also not a barista, a line cook, a chef, or a waitress. I’m not a bartender. I’m not a cashier at Wawa.

Those are, for the record, all of the people who made their way to work in a snowstorm because their places of business decided to stay #OpeninPHL. 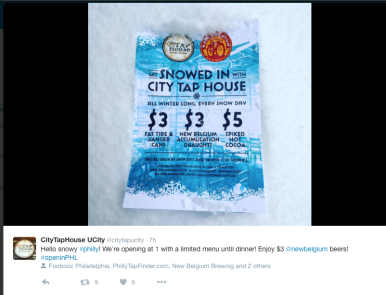 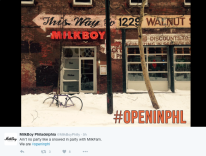 I’m a writer and a blogger, and I am also a theatre artist.

And today, I’m glad that I didn’t have to go to work, something that was not afforded to many of my colleagues and fellow theatre artists. Today, I snuggled under the blankets and slept in, while my friends trudged through the snow to rehearse, or to perform for minuscule audiences. To sell concessions and tickets, to unlock the theatre doors, to control the lights and the sound.

And I know it can be fun, because I’ve been there before. I’ve done the trudge-through-the-snow, show-must-go-on, do-or-die-to-make-the-art thing, and it’s an adrenaline rush. It’s a team building exercise, and it’s an amazing feeling: to walk to work feeling like you are the last human alone in a quiet, wintery world, a world that looks so very different from the one you inhabited just a few hours before. I’ve even been in those audiences, those “come see the show for free if you can make it here” shows, when it feels like a performance that exists only for you — which of course, in a sense, it is.

I also work for a small theatre company, and I’ve served as a producer, a marketing director, and someone who sees the effects that a natural disaster can have on a bottom line. Who knows exactly how many rehearsal hours are allotted, and knows there are almost never enough. Knows how precious those tech-time hours are. Knows how financially disastrous a show cancellation can be.

We are taught that the show must go on. We listen to stories that are passed down, instilled in us as heroic myth, bragging rights in an unnamed competition: the show when the lead actress performed concussed; the time when the actress kept tap-dancing while bleeding; the time when the actor passed out after his curtain call because he had a hundred-and-three-degree fever. If you work in this business, you know these stories. Chances are, you have one yourself.

And it’s here that I remind you, my fellow theatre artists, that you are not doctors. You are not ambulance drivers or snowplow operators. You are musicians, artists, singers, and dancers. You are technicians and stage managers, designers and stagehands, janitors and salespeople, mothers, fathers, students and teachers. You create beauty and joy, you make people laugh and cry, you teach and instruct and you create delight and you share it with others, and you can’t do any of those things if you’ve gotten into a car crash on your way to the theatre.

I say this not to throw stones at those of you who went to work today. I am sure that for those of you who performed today, some of you feel exhilarated. You’re swept up in the rush of getting the job done, and that’s a great feeling, and I don’t mean to shame you away from that. I don’t want to take that feeling of pride and achievement from you.

But we’d be having a different conversation if one of us got hurt. It would be a different story if someone was injured on their way to work, one of the unlucky few that inevitably do make headlines in the aftermath of every major snowstorm. There’s a version of this scenario that doesn’t end with high-fives and everyone going out for snow beers, and it’s unlikely, but it’s possible, much more so than on any day of the year. The risk is greater during a snowstorm, and so we collectively need to decide whether or not that risk is worth it.

I don’t want to see headlines like “On Broadway, A Blizzard of Bargains.”

I don’t want to see it, because I know that it’s possible for snowplows and trucks to lose control on icy streets, and I know a whole lot of actors and box office workers and dressers and stage managers and bartenders and cashiers and people who had to work today, and I would feel a lot better about the odds of that truck losing control on the ice if all those people I loved had the chance to stay indoors.

In a state of emergency, friends, it is okay if the show does not go on. You are a person, and you are worth more — immensely more — than a 2pm matinee.

If you are a doctor or a nurse, a firefighter or an ambulance driver, a person who is actively involved in helping keep us all safe from this snowstorm: thank you.

If you had to go to work today, or if you’re still traveling: please be safe out there.