“I was a lifeguard for, like, five years,” I say casually to my coworkers. “I mean, I didn’t really save anyone’s life or anything. It was just kind of what you did in a small town when you were sixteen and needed a summer job and wanted to make out with your boyfriend behind the chlorine shed.”

My friend Charlie nods as I take out my lunch. “Double sandwiches again?”

I was a lifeguard, and a swim instructor, for five years. The summers of sixteen-seventeen-eighteen-nineteen-twenty: twirled a whistle around my fingers. Burned thick tan lines into my shoulderblades. Taught toddlers to float. At sixteen: kissed Lifeguard Jamie during staff party while the older kids drank contraband beers. Seventeen: kissed Lifeguard Mike in the underground chlorine bunker*. Eighteen-nineteen-twenty: Pined after college boys with bad haircuts who lived in different states. Showed up to work on time. Blew bubbles with babies. Taught dozens of kids how to dive.

I’ve never been an athlete. Swimming was the closest I ever came to feeling like I could fake my way towards some kind of athletic prowess, but I was never one of the swim team girls with big ripped shoulders and permanent goggle ridges on my eyebrows. I was just the girl who muscled her way through the lifeguard test. I did once spend eight puberty-stricken months on the Adirondack Splash Synchronized Swimming Team, which was sort of cool. If by “cool,” I mean, “I cannot stress to you enough the magnitude of how incredibly uncool this was.” We came in last place at the only meet we ever entered. Shortly thereafter the Adirondack Splash Synchronized Swimming Team disbanded and I attempted to burn all the photos of me wearing a sparkly bathing suit and waterproof headpiece.

Lot of things have happened since I was a lifeguard. Lifeguard Jamie got married. Lifeguard Mike got engaged. I discovered an affinity for Jack Daniels and the fancy cheese section at Whole Foods.

Surprising absolutely no one but myself, I don’t look quite the same in a bathing suit anymore.

The girl at the desk looks at me strangely as she hands over the key fob. “Do you, uh, have any questions? It’s just – you look really nervous.”

I get all awkward and stammer something out about how this is my first time, I’ve never joined a gym before. The nervous laughter hovers uncomfortably. I make a joke, something about those having those pesky first day gym anxieties! She smiles, somewhere between genuine confusion and gentle patronization. “I mean, that’s not really a thing, but –“

I make it twenty-five minutes on the treadmill. I have worn my favorite red tank top. Four minutes in, the tank top and my face are indistinguishable. I’m surrounded, like a really ominous moment in an Animal Planet documentary, by incredibly muscular, panting, sweating people. Surrounded on all sides. The rhythm of the machines is terrifying. I hate everything about this.  Is this how treadmills are supposed to work? I’m the only one, save the elderly gentleman with the moustache, who is using the handle grips. I am certain I will fall off, causing grievous personal injury to myself and others. Is it too late to revisit the part of the contract where I said I wouldn’t sue anyone if that happened?

In twenty-five minutes I traveled just over a mile and a half and I want to die but I can’t because everyone would see me.

But it’s okay because I saved the pool for last.

And I make it to the locker room and I wriggle my ass into my last surviving one-piece and I smell the chlorine and ok, I’m ok. I know this. I can do this. Here we go.

There is one other person already in the water. She’s approximately eighty years old. Yesss. Bathing cap, black swimsuit with tiny attached skirt. I have a brief fantasy of making new best swimming friends with Sweet Older Lady. Tuesdays With Dottie: Lessons From The Pool. I’ll make her cookies, she’ll talk me into taking aqua-aerobics with Derek. I smile, hop in, make it about a hundred feet, and feel like my lungs are going to explode. I hang onto the concrete lip for dear life.

Old Lady Swimsuit gives me massive side-eye, and can’t contain her grin as she proceeds to outpace me for the next fifteen minutes. She’s still going strong as I heave myself up the ladder and slink away, defeated.

Day Two starts out rough. You guys. You GUYS! Orange Is The New Black is the new Netflix Original series, and it just dropped and it’s awesome, and …. oh, jesus. Okay. Okay, fine.

It takes me a good two hours of psyching myself up and at least thirty minutes of sucking in my stomach in front of the mirror, but I finally get out the door. And I go in and I’m grumpy but I’m determined and I head straight downstairs and I get down there prepared to kick Old Lady Swimsuit’s ass and –

The pool is empty.

And for thirty minutes, that’s all it is. No lifeguard. No gym employee. Just me, and the pool. It’s a tiny little 50-foot deal, buried deep in the basement of this South Philly gym, no towel racks or amenities or anything. Just me, some water, and the hum of the intake system.

And for those thirty minutes, I am happier than I have been in a long time. Breaststroke? Floppy and sloppy. Backstroke? Slammed my head into the wall. Butterfly? Looked like a manatee trying to signal an airplane. But I did it. Was it pretty? Hell no. Was it kind of awesome? Yeah. Maybe a little. It was kind of awesome.

And I’m typing this, the evening of Day Two, still not sure that I’ll want to go back tomorrow. Even after the shower my hair still feels brittle and my skin feels itchy and I can’t shake the feeling that there’s now water buried so deep in my eardrum that it’ll lurk there for years and then suddenly leak into my brain when I least expect it.  Am I going to want to go back tomorrow? No. Probably not.

But I’m going to do my fucking best to try.

*For the record, Whoever Started That Rumor Sometime Around July 2002: That’s seriously all we did down there was kiss. I promise. I was way too freaked out by the entire idea of sex, plus it smelled like chlorine and I didn’t want to get foot fungus. So, you know, JUST TO SET THAT RECORD STRAIGHT. 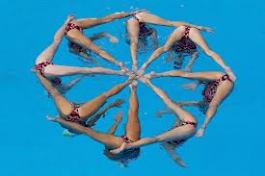 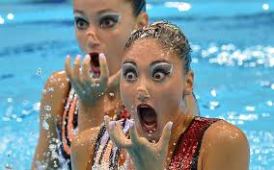 Sidebar: HELP I should be going to bed right now and instead I can’t stop google image searching “synchronized swimming.” I’m SO TORN between how incredibly athletic and difficult I know this sport to be, and how incredibly stupid ALL OF THOSE PICTURES LOOK.